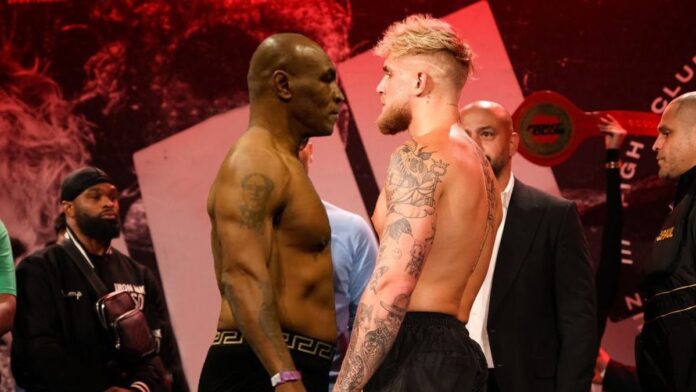 Later this year Jake Paul and Tyson were all set to fight in an exhibition round in Las Vegas. But the heavyweight legend Tyson has denied the claim.

As per reports, the former heavyweight world champion could take on Jake Paul this year. Mike Tyson has denied the claim of a fight against Jake in a $50 Million bout. Mike Tyson now says,’ This is new to me. I saw Jake in St. Barths and he never mentioned it.’ Tyson got retired after his bout with Kevin McBride in 2005.

He returned in 2020 with legend Roy Jones Jr with the veterans fighting to a draw in an exhibition bout. At the second round of YouTube star’s second professional fight, Paul knocked out basketball star Nate Robinson in the second round. A source has told The Sun,’ Mike and Jake are on board for an exhibition bout in Las Vegas. A verbal deal has been struck to get it on, but like all forms of sports business, now it’s all about the contracts and money split.

Further, it says, ‘ Mike is looking for a certain figure to get into the ring with a profit share guarantee. Jake has that on his mind but is keen to show the world that stepping into the ring with a man once called the worst man on the planet, takes his boxing career to the next level.’ For the impact in boxing, the Paul brothers previously got praised by Tyson. Logan is been linked with about with Tyson this year but refused to deny reports he is in buzz with.