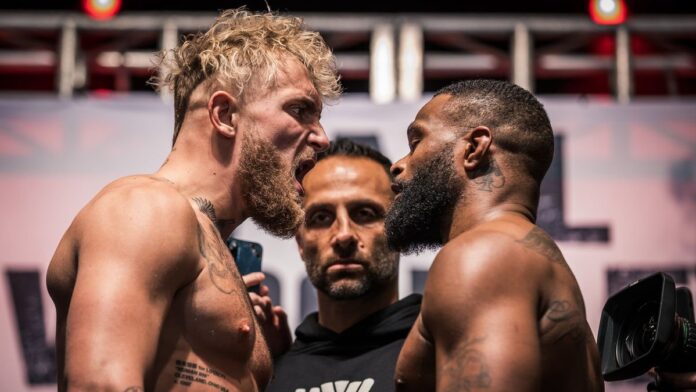 YouTube star Jake Paul seems to have made friends with his recent opponent Tyron Woodley. The internet star is setting him up for a boxing match against NFT star Le’Veon Bell.

Earlier the online back and forth could be seen between Jake Paul and Tyron Woodley, now it seems that Le’Veon Bell is coming into the scene by calling out ‘The Problem Child’ to fight him rather than T-Wood.

With his win over Tyron Woodley, Paul has extended his undefeated professional boxing streak to 5-0. The fight ended in a brutal fashion with a knockout punch from the YouTuber in the sixth round which made the UFC fighter drop down to the floor.

After the fight, NFL running back Le’Veon Bell challenged Paul to box with him and claimed that the five times welterweight champion Tyron Woodley could not box well. “@jakepaul fight me, stop tryna fight ppl who can’t box,” he wrote.

He further wrote, “I’m tired of watching him out box ppl who don’t even wanna box…if he wanna boxing match, a real one, he’d fight me…period, stop fightin small dudes who can’t box.”

Surprisingly, Jake Paul fired back at the NFL player suggesting Woodley to fight Le’Veon Bell at the next event put forth by the YouTuber’s MVP company. He also took a shot at Bell for being released from Baltimore Ravens in just five games.

Paul wrote, “Aye @TWooodley this clown saying you can’t box. How about you show him as part of the next MVP event? Tyron would drop you faster than the Ravens !!”