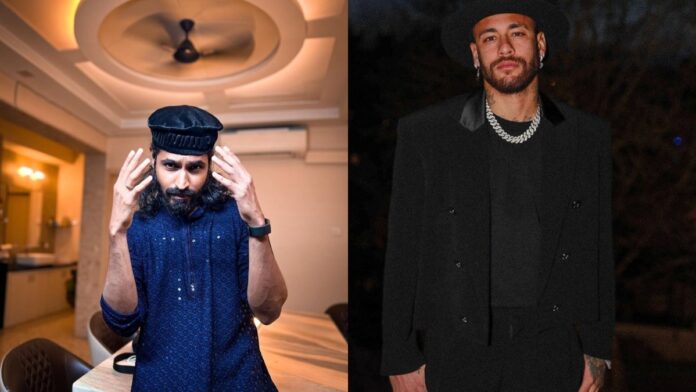 Famed rapper Emiway Bantai shares a football field with Neymar. He posted a picture with the football star on Instagram.

Neymar da Silva Santos Junior well known as Neymar is a Brazilian football star. He plays as a forward for Ligue 1 club Paris Saint-Germain and the Brazil national team. Neymar is considered a versatile player, being able to play as either a central striker, second striker, winger, or occasionally as an attacking midfielder. A renowned playmaker and prolific goalscorer, he is widely regarded as one of the best players in the world.

Emiway Bantai is a singer, dancer, rapper, songwriter, editor, and music composer. He is best known for his song “Asli Hip Hop” in the film “Gully Boy”. His real name is Bilal Shaikh and was born into an orthodox middle-class family. His name Emiway is the combination of the names of Eminem and Lil Wayne, i.e., Emi from Eminem and Way from Wayne. Bantai had also auditioned for the popular Indian reality show- India’s Got Talent.

On Monday the rapper posted a picture with Neymar on Instagram. He captioned the picture saying, “Neymar ke sath share karele maidan… Thanks to @neymarjr for his precious time… Respect.” Australian songwriter and singer Celina Sharma was also present over there. The Paris Saint Germain forward Kylian Mbappe clicked few snaps with them. Sharma and Emiway was spotted playing football with Neymar and Mbappe.