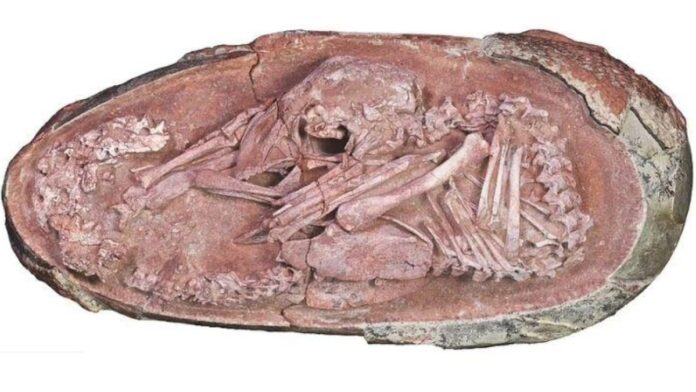 Scientists have announced the discovery of a perfectly preserved dinosaur embryo dating to at least 66 million years back which was preparing itself to be hatched from the eggshell just like chicken nowadays.

The fossilized embryo was discovered in the southern part of China specifically in Ganzhou. It is believed to belong to a toothless theropod dinosaur or oviraptorosaur which the researchers have named “Baby Yingliang.”

University of Birmingham researcher Fion Waisum Ma said, “It is one of the best dinosaur embryos ever found in history.” He stated that this discovery has given researchers a deep understanding of the link between dinosaurs and modern birds.

The researchers found Baby Yingliang in a curled position which is a common behaviour seen in birds before they hatch. However, this posture was not seen previously in dinosaurs.

“This indicates that such behaviour in modern birds first evolved and originated among their dinosaur ancestors,” Dr Ma told the AFP.

The name of this dinosaur species Oviraptorosaurs means “egg thief lizards.” They were feathered creatures that lived in Asia and North America during the late Cretaceous period.

The Baby Yingliang dinosaur embryo found was measured around 27 centimeters (10.6 inches) long from head to tail. It sits inside a 17 centimeter-long egg at the Yingliang Stone Nature History Museum.