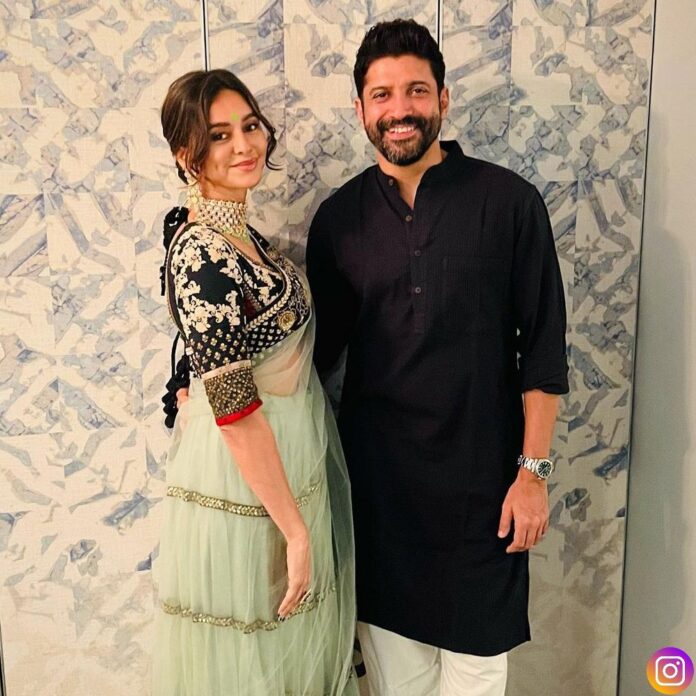 Farhan Akhtar is an Indian director, actor, playback singer, screenwriter, and television host. He was born in Mumbai to screenwriters Honey Irani and Javed Akhtar. Shibani Dandekar is an Indian-Australian actress, singer, model, and anchor. Shibani began her career in American television as a television anchor. For the 2019 ICC Cricket World Cup, she was one of the co-hosts.

Actor-host Shibani and Bollywood star Farhan Akhtar got married on Saturday. The intimate wedding ceremony was attended by close friends and family in Khandala. They both got married to each other after dating for more than four years. Still, there is no official confirmation from the couple. All the social media handles are flooded with images from the wedding ceremony.

The 48-year-old Farhan sported a black tuxedo with a matching bow. Shibani Dandekar, the 41-year-old wore an off-shoulder red gown, teamed with a veil of the same color. The wedding was attended by Farhan and Shibani’s friends from the industry. Hrithik Roshan, Rhea Chakraborty, Saqib Saleem, Farah Khan, Zoya Akhtar, Shankar Mahadevan, Ehsaan Noorani, Loy Mendosa among others.

Farah Khan uploaded a picture with Zoya Akhtar from the wedding on her Instagram account. She captioned it with, ‘Aaj hamare bhai @faroutakhtar ki shaadi hain’.