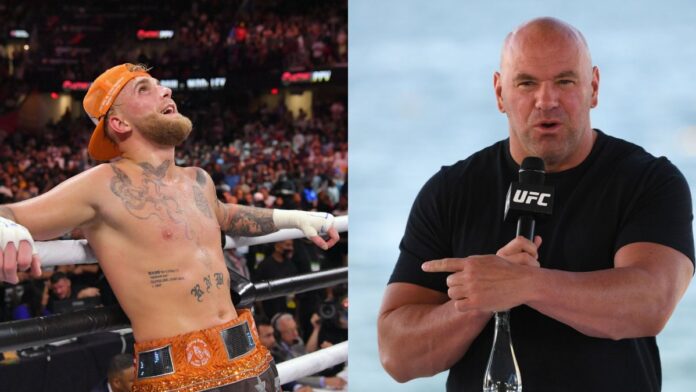 UFC president Dana White has challenged the YouTube star turned professional boxer for undergoing random drug tests for a decade if Jake Paul does the same for just a couple of years.

The Youtuber has been on a wild winning streak with a 5-0 record in professional boxing, with his latest knockout being the UFC welterweight champion Tyron Woodley who fell to Paul brutal knockout.

After his win over Woodley, Jake Paul has returned to his earlier troll of calling out UFC fighters including Jorge Masvidal, Nate Diaz, Conor McGregor and going as far as Dana White.

Recently, he went on to Twitter to reveal his boxing bucket list which had five names including Dana White along with Canelo Alvarez, Mike Tyson, Floyd Mayweather and Tyson Fury.

Now, with Paul presumably thinking of Dana White to let UFC signed Jorge Masvidal to fight with the YouTuber, he did the unthinkable. During his appearance on The Fight with Teddy Atlas podcast, White challenged Paul for drug testing.

“No (I won’t release fighters to face Paul),” White said. “You notice how he wants to fight f*cking everybody that’s not in his weight class, guys that are older and all this bullsh*t. Go fight a boxer. Go hump somebody else’s leg, you goofball,” he concluded.