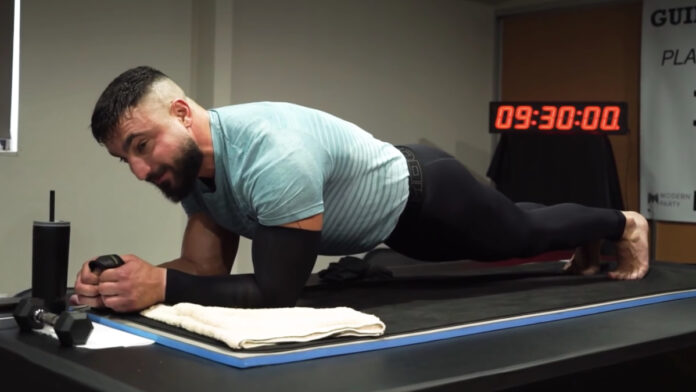 An Australian man with CRPS (complex regional pain syndrome) has inked his name into the Guinness World Record for the longest-held plank. The man from Adelaide broke the world record for longest duration in the abdominal plank position (male).

He managed to hold the core wrenching position for nine hours thirty minutes and one second and set a new historic precedent with that.

As per the Guinness Book of World Records, Daniel Scali beat the previous record of eight hours, 15 minutes and 15 seconds, which was earlier held by ex-marine George Hood from the US in February last year. A feat that no one thought was possible to break earlier.

The Australian man’s time comfortably outlasted Hood by over an hour. Also, in an unofficial attempt, Scali set the record time of 9 hours and 9 minutes and successfully managed to surpass it this time.

It should be noted that Scali suffers from a condition with chronic pain which causes him almost constant and excess pain and inflammation in his left arm. The slightest pressure, movement, soft touch, water or wind on his arm could increase his pain.

He developed CRPS at 12 when he met with an accident causing his brain to send incorrect signals to his arm. He turned to fitness to help him manage his pain tolerance.

When he finally dropped to the floor he was filled with emotions. He said, “When I finished the plank, the emotions that ran through me were phenomenal. The emotion of joy. I’ve achieved the goal, I’ve achieved my main objective of bringing awareness to CRPS, and I’ve achieved the record.”