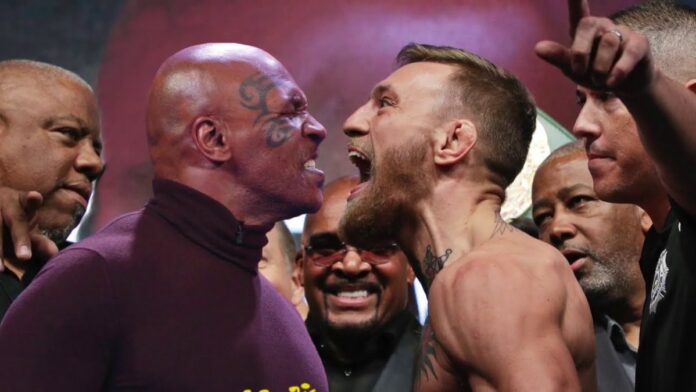 Mike Tyson has warned Conor McGregor that he will “get hurt” in his UFC comeback fight regardless of his opponent. McGregor is in the final stages of recovering from a broken tibia he suffered against Dustin Poirier in their trilogy fight. The Irishman will shortly undergo a CT scan on his leg but expects he should now be able to use it in training comfortably.

The former two-weight champion is without a UFC win in over two years, losing back-to-back fights against Poirier in 2021. McGregor, who is plotting a return at welterweight challenged Usman in the hopes of adding a third world title to his collection.

Tyson has joined those who have previously encouraged McGregor to take a warm-up fight in his return and thinks regardless of who he fights, he faces the risk of getting injured. “Even if he wins, he’s gonna get hurt in the next fight and he can’t fight the next fight [after that],” Tyson said on The Fight Card podcast.

“You get your experience down, three more fights, you feel good. The last two guys are really qualified opponents, now you go back out there. I’m a strong believer that after a defeat you should do a couple of fights to get your feet wet. Conor, I think you should build your confidence up and go do what you do, win excitingly.”